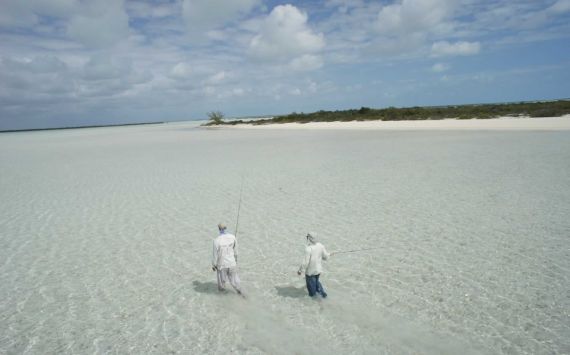 At Sweetwater Travel Company we have a profound attachment to the land, wildlife and rivers that we fish. We understand first and foremost that the health of the river and its runs of fish are more important than the success of our flyfishing operations. By running small catch and release operations, we are able to utilize a sustainable resource in good conscience. We also hire as many local residents as possible in each of our operations. This helps the local economy and helps insure that those affected by our operations are affected in a positive manner.

We have found that when the locals understand that a healthy fishery translates into jobs and economic prosperity, that they are reluctant to poach, spear or pollute.

In addition we hope that in each of the destinations that we are involved in that we make a difference to the watershed. This may be a large as trying to set aside an entire watershed for the first ever Taimen preserve or as small as donating trips for auction to causes like Trout Unlimited, The Cottonwood Resource Council or the Montana Land Reliance.

We understand that we make our living from great wild and clean waters and the fish that swim in them so we do everything we can to help protect that legacy.   As anglers we care about the waters we fish and hope you do too. 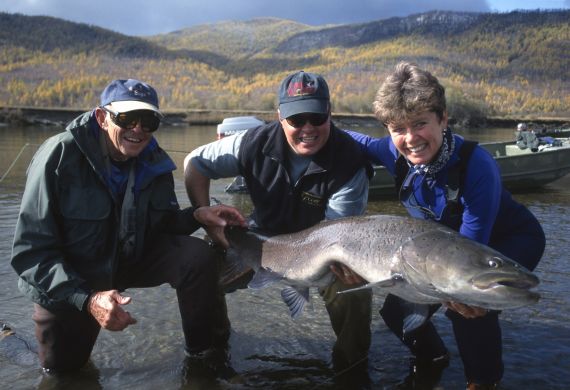 As an angler considering traveling to Mongolia, you are in the driver's seat, and you are in the position to choose an outfitter who is protecting the resource. Look at a company's literature and web-site before you book a trip. If their literature shows dead fish, or fish being mishandled, then please do not fish with them. They are the biggest threat to Mongolia's Taimen, and, when you travel with them, you will play a role in the demise of the world's last stable population of Taimen.

The Taimen Conservation Fund's first project was the rebuilding of the Dayan Derkh Buddhist monastery. Mongolian Buddhists, through their religious teachings, monasteries, and temples, have actively nurtured an environmental awareness among Mongolia's nomads for hundreds of years. In a nomadic culture like Mongolia, Buddhist temples and monasteries were often the meeting point for communities always on the move and served as the cultural and spiritual backbone for Mongolia's nomads. 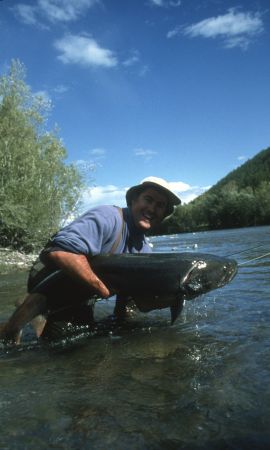 However, in the 1930's, at the direction of the Soviet and Mongolian Communist leaderships, Mongolia's Buddhists were executed, imprisoned, and exiled. Buddhist temples and monasteries were destroyed, and Mongolia's rich Buddhist tradition was forced under ground. The Dayan Derkh Monastery, located in Hovsgol Province, Mongolia was one of the monasteries destroyed by the Communists. Of its 400 monks, several hundred were summarily executed, the fortunate survivors fled to a nearby cave and lived in the cave until Mongolia's purge subsided.  The Taimen Conservation Fund successfully re-built this monastery, and it is now serving as a cultural/religious gathering point for Mongolian in the Eg-ur watershed.

Today's work is now focused on hiring riverkeepers to insure that all Taimen are caught and released, all fishing is done with single, barbless hooks, and foreigners fishing the river have the proper licenses.  These efforts, most significantly the work of the riverkeeper, are paying dividends with fish size and fish number on the increase.  We are really excited about the future.

By supporting the Taimen Conservation Fund through a donation to the Taimen Fund, you can help preserve one of the world's healthiest wild Taimen populations.  Insuring the Taimen's survival, requires considerable financial support. For more information on the Taimen conservation efforts, please call the Taimen Fund at 406-223-3550.  Or, visit the Taimen Fund's website at www.taimenfund.org   We thank you in advance for your support.